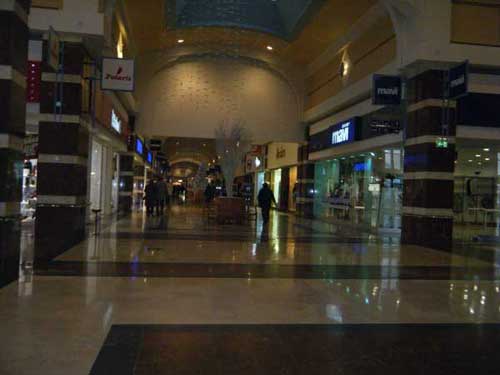 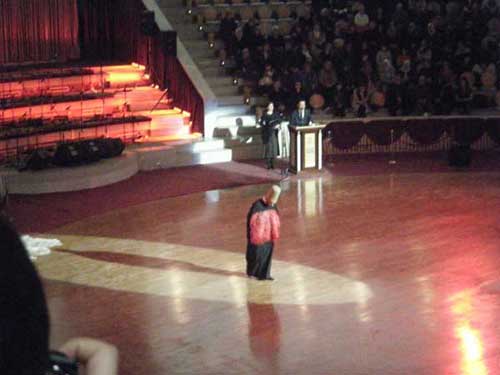 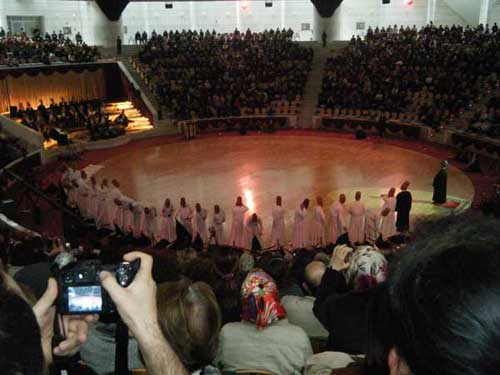 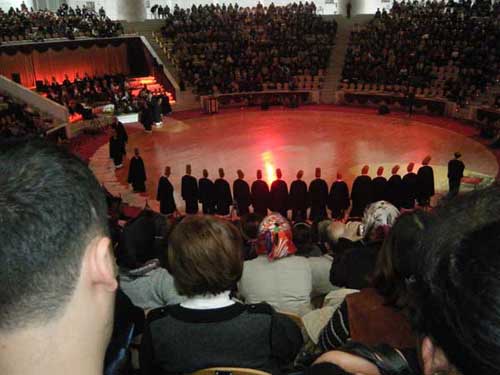 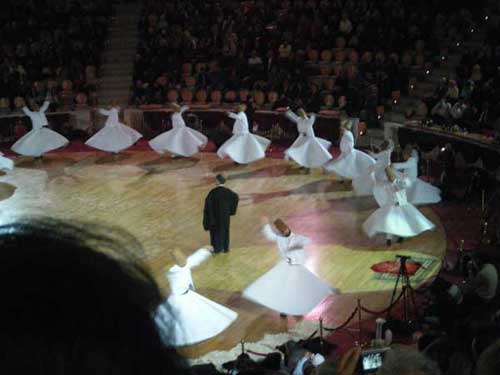 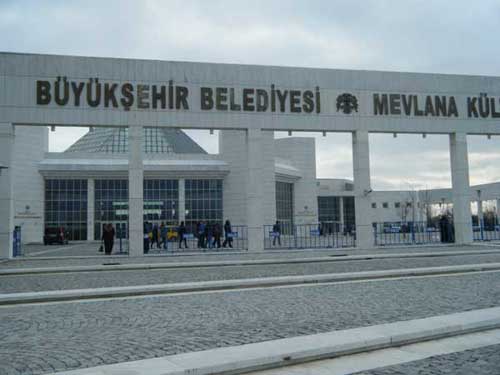 On December 17th, the other girls and I took a trip to Konya, the most religious city in Turkey. AFS managed to snag is seats at Sema: the prayer and ceremony of The Whirling Dervishes of Mevlana.

Rebecca, Fatihah and I, our day started at 4:00am. We had to take a three and a halfv buss ride from Sarki Karaagac. Upon or arrival we were greeted by the other Amber and Sadie from Canakkale and while waiting for the Adana girls we had a brief breakfast. We soon found out that they would not arrive for ours and of courseâ€¦ we decided to SHOP! (Okay off topic for a sec, Sarki is a small town, a village hell and Konya is one of the largest cities in Turkey). We managed to find a mall, (which I have not seen in 16 weeks) boy was I excited! Not only was this mall similar to the ones residing in Los Angeles but the walls inside were decked with Christmas decorations! There was a food court, jungle gym, huge department store similar to Macy’s or Sears and not to mention AMERICAN TRADE PRODUCTS! After spending about an hour in the mall, the girls from Adana arrived and we got our day started.

We went to a restaurant in Konya for lunch. So AFS’s choice was lamb, which I was not expressed to us til after we ingested it. We were told that we would be eating meat that, “melts in your mouth.” I should have no comment at all but I will say… inereting. After the “melted meat”, we went to the Buyuksehir Belediyesi Mevlana Kultur Merkezi, where Sema (The prayer) would be held. There were thousands of people there from all over the world, representing almost every nationality: Turks, Germans, Russians, Koreans, Africans, Indians and of course us the Americans. The show was opened with a performance given by a live band. Next, the history of Mevlana was presented. Apparetly, he died on my birthday, December 17, 1273 and was the father of mysticism.

After the history was presented, Sema began. The first Dervish came out and placed a red sheep skin over the prayer rug. The Sema musicians came in shortly after. Once the music began the additional 25 Dervishes filed in. The were wearing the brown hat representing Mevlana’s Tomb and a black robe representing the flesh and worldly comforts. Underneath the rob the wore white skirts symbolizing the spirit. The prayer started with four selams (greetings) between each Dervish. They performed th selams while still coated in the “wordly comforts”, the black robes. After the four selams, the Dervishes removed their robes and formed a line. There were two higher Dervishes: one determining when they can pass the highest Dervish during the whirling while the other gave them the initial blessing to begin whirling, one after another. These two higher Dervishes stay in their robes ( I was told that this is because they can communicate with God in the flesh or the spirit). The line of 24 Dervishes beagn to move forward and receive their blesslings form the higher Dervish and then began to whirl. The whirling lasted about 5-10 minutes at a time and then they cleared the floor and gathered in groups of 2-3 around the arena. A minute or two after, the whirling began again. During the whirling the Dervishes held their heads slightly tilted to the right, their right hand extended out and bent upwards (receiving God’s blessing) while their left hand held extended outward and bent downwards (delivering the blessings to the Earth).

After the ceremony was over the Dervishes dressed back in the “flesh”, a part of the Qu’ran was recited and they then returned back to their caves for meditation. The same Dervish that place the sheep skin prior to the performance, received it once all the Dervishes exited. After Sema, the group and I went to the museum about Turkey’s war for independence and later the Tomb Of Mevlana. At Mevlana’s Tomb, again there were hundreds maybe thousands of people there. Inside, people were sitting as well as standing along the walls in prayer and in trances (sorry readers cameras were not allowed). Mevlana’s Tomb was the largest and it was green and decorated with prayers from the Qu’ran. His father is buried behind him on a tilted angle. Rumor has it, his father’s tomb tilted on its own in respect due to Mevlana and his great works. In addition, Mevlana’s immediate relatives, close friends and some of his students are buried there as well. On display in glass cases, throughout the Tomb/Museum, are his instruments, The Original Versions of the Qu’ran, his rugs and clothes from his home as well as Muhammed The Prophet’s beard. On this last note the people visiting the tomb had to have been the most spiritual people I have ever seen.

Originally written for On Turkish Turf 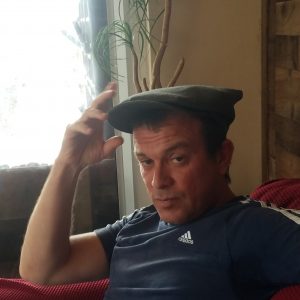 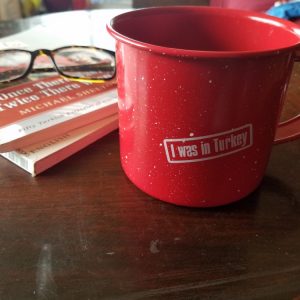